Mahatma Gandhi: A Lifelong Racist? No.

Amidst protests regarding the ‘Black Rights Matter’ movement, resulting from the inhumane police brutality targeted towards black people, a call to ‘decolonise history’ has been strongly proposed. For an immediate effect, the removal of statues of historical figures, which were undoubtedly racist, have occurred throughout the world. As the ‘witch hunt’ to scrutiny previously alleged historical figures, the character of ‘Mahatma Gandhi’ – the leader of India’s successful non-violent independence movement against British rule – fell under public scrutiny of a global anti-racism movement. His statue in the University of Ghana was toppled in 2018 on the account of his ‘racist remarks’. The talks of the removal of his further statues have resurfaced during this ‘witch hunt’. There is a particular focus to remove a statue in an area with a densely populated Indian community in the city of Leicester, in the United Kingdom.

Similar to many controversies surrounding the great personality of Gandhi, a dissonance between his portrayal by native Indians and non-resident Indian communities, particularly occupying the UK, USA, Australia and New Zealand. In India, one could spend their entire life without seeing and interacting with an individual of an African origin. Multicultural society in these Western countries, on the spectrum of privilege, seem to benefit the remaining portion of society that is not ethnically African, through institutionalised racism. India’s diversity is fascinating, as a myriad of races have coalesced in the past to create the rich and unique genetic diversity it possesses today. Although the colonial imprint of colorism has permeated Indian society, its genetic diversity has promoted a shared ‘homogeneity’ of being Indian. Unlike Western communities, the demarcation between ‘blacks’ and ‘whites’ is not so clear. There is room for every shade. Gandhi’s ‘racist views’ do not need to be confronted with, by Indian society, as such a community of a single race to oppose it, does not exist within India.

During his time in South Africa, Gandhi exposed strong racist views. However, did he continue to express these views across his lifetime? The credibility of various esteemed historians, such as Ramachandra Guha, argues otherwise. Let us examine his essay, ‘How Gandhi shed his racist robe’.

It is crucial to acknowledge that each historical figure is shaped by their contemporary times. His formal education occurred in British India and he later moved to London to pursue his studies in Law at University College London (UCL), to become a barrister. The academic environment in which he spent his formative years may have impacted the worldview he obtained. Gandhi was under the belief of a ‘hierarchy of civilisations’, descending as Europeans, Indians and Africans, respectively. He utilised derogatory and condescending language for the Africans. This was an era in which the theories of eugenics and racial hierarchies dominated the educational sphere, and were indoctrinated into the minds of children as irrefutable scientific facts. 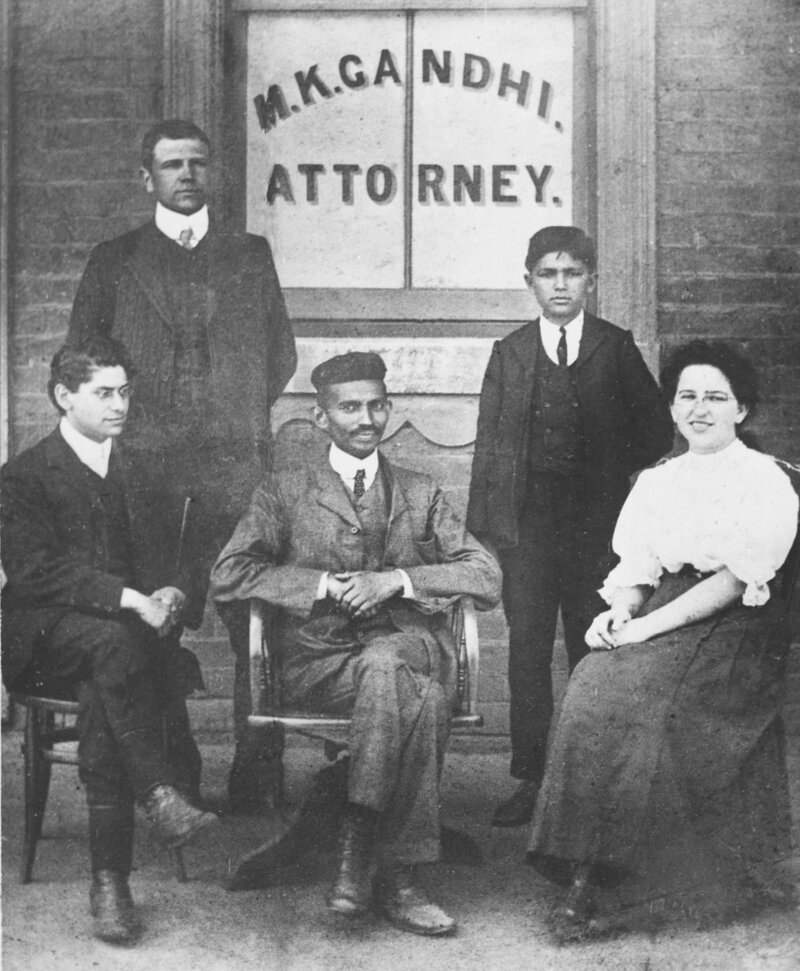 1902: Mahatma Gandhi (in the middle) with colleagues at his law office in Johannesburg [Image]

Neither search engines, such as Google or Wikipedia, existed to confirm or deny one’s biases, nor were there popular movements to emancipate ‘coloured people‘ in British society. Individuals from colonised nations were compelled to assimilate their identities Into the systems, which actively endorsed and promoted racism, that were forced upon them.

Despite this cultural conditioning in his preliminary years, he was able to overcome this anti-black sentiment, as evident from his statements later on in life. A speech delivered in South Africa (May 1908), is reflective of his transformation. He emphasised the contributions of the Indians and the Africans to make up the British Empire. He instructed the British to promote equality of all races in that speech. Gandhi’s prolonged stay in Africa, enabled him to change his prejudices, that he realised the forceful occupation of the British over the natives – the Africans.

Gandhi’s newspaper, ‘Indian Opinion’, featured reports on discrimination against Africans by the Europeans. Reports on segregations of the ‘coloured’ vs the ‘whites’ were written, for which Gandhi felt the need non-violent protest (Satyāgraha). He voiced these concerns in further speeches, inciting South Africans to pursue the path of ‘non-violent resistance’. His book, ‘Satyagraha in South Africa’, he defends the cultural traditions of Africa, as they had a ‘perfect grasp of the distinction between truth and falsehood’.

In Gandhi‘s contact with leaders of the African National Congress, civil right activists from the US such as the Howard Thurman, the future mentor of Martin Luther King, he showed a persistent attention to detail regarding the concerns of African-Americans. Gandhi enquired regarding lyinching, voting rights, education etc. As time progressed, he instructed South African Indians to merge with the struggles of the natives. In his famous article against the arrestors of South African protests, he insisted that, ‘it is time white men learnt to treat every human being as their equal.’ This displays Gandhi’s progressive outlook towards Africans throughout his life.

Gandhi had transformed his views on the perception of a race that originated from the African continent. Is it deemed fair to judge him solely based on his former views, which were undeniably the product of colonial attitudes towards other races? Can one event in an individual’s life be the cause of a lifetime of blame? Can the ‘Father of the Nation (of India)’ be viewed merely for his ‘racist remarks’, thus ignoring his lifelong momentous contribution to the Indian independence movement?

It cannot be ignored, that one of the most influential anti-colonial figures in history during the 20th century, Gandhi, served as an inspiration for Nelson Mandela’ anti-apartheid struggle in South Africa, and Martin Luther King’s racial justice movement in America!

The statues should not be torn down for this reason. However, the BLM movement has sparked an interesting debate: should we continue to venerate historical figures, whilst ignoring problematic aspects of their personal lives? It is important for people to be aware of Gandhi’s more concerning views regarding caste, patriarchy, religious tensions which led to partition etc., in order to have a balanced view on whether to venerate him unquestionably or not.

A peculiar aspect of Gandhi’s life is often avoided by Indians, and caricatured by the West. To both cultures, his approach to ‘Brahmacharya’ (self-control for spiritual progress, loosely: celibacy) in his ‘celibacy tests‘ after the death of his wife. He shared his bed with naked young women, without engaging in any sexual relations. If successful in abstinence, he would have attained the height of Brahmacharya. This was important to him, to reaffirm his purity. He felt that the he was partially to blame for the communal violence which occurred, due to the imperfections within him. He strongly believed that these imperfections came as a result of the failings of his celibacy. Neither the young women nor Gandhi caused any harm to each other. These ‘experiments’ were a ‘private affair’, and regardless of whether they make sense to the modern day reader, they were Gandhi’s way of coming to terms with the failings around him, despite his best efforts. 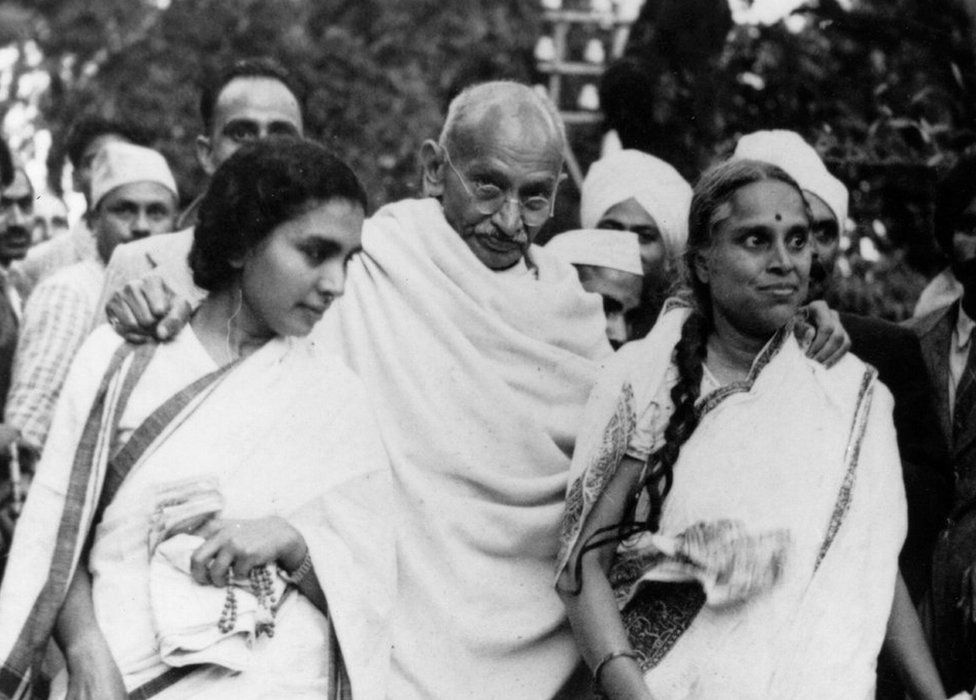 As seen in the example of the ‘celibacy tests’, it is pertinently these ‘flaws’ and the journey undertaken for their atonement, that make him exceptional. The life of Gandhi, and other revered figures, serve as an inspiration to the common man to confront their inner demons and prejudices, rather than figures who have led life with a ‘clean slate’.

You have Successfully Subscribed!